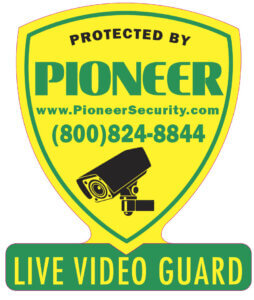 Watch a few live video guard interventions to get a better understanding of how powerful our guard-monitored surveillance cameras are. Live video guard monitoring is also known as proactive video monitoring because our human guards monitor suspicious activity in real time via video, and take ACTION before crimes occur.

Most surveillance cameras are not live monitored. This means that video coverage of a crime is simply forensic. The crime wasn’t stopped, and frequently with criminals wearing hoodies and Covid-19 masks, their forensic value is minimal.

Alternatively, many business owners try to monitor their surveillance cameras on their phone. However, after dozens of false alarms caused by birds, wind, and people authorized to be on the property, most business owners start to ignore the video notifications they receive.

Live monitoring by professionally trained guards via two-way talk is an entirely new approach: one that stops crime before it starts.

Until now, live proactive video monitoring was very expensive. But our live-video guard system uses artificial intelligence to greatly reduce false alarms, freeing our human guards to concentrate on suspicious activity. Our systems use a combination of automated voice messages, and real-time two-way conversations between the guards, and the suspect, and to dispatch the police to a crime in process when necessary. These 911 calls (crime in process) are the highest priority for the police, because it gives them the possibility of actually catching the bad guys. Response to a crime in process 911 call is a great deal faster than police response to a traditional burglar alarm, because like the business owner trying to monitor is his video, the police are tired of being burned by false alarms.